Further aspects and advantage of this invention will be highlighted in the following description of figures, which is proposed for the sake of better illustating, but not to limit: the figures include: – Figure 1 is a schematic cross sectional view of an organic thin film transistor in a “bilayer” configuration according to one of the possible realization of the present invention;
Compounds with formula (T), advantageously the ones with formula (F) and more advantageously the compounds PTO, PTA, PTZ, DTA e DTZ can be used in the fabrication of active layers for transistors above described.
Another aspect of the invention is the use of one – or more than one – compounds with formula (I) or – more advantageously – with formula (F) as active layer in a thin film transistor with a bilayer configuration.
-cyclodextrines (useful to well discriminate chiral alcohols, ketones, terpenes etc.) is often not useful for the two citronellols separation and, in the rare cases in which it is useful, separation occurs with resolution degree lower than 1, that is highly insufficient.
Indeed such devices do not exhibit the desired field-effect amplified current at negative gate bias.

INVESTIGATING OR ANALYSING MATERIALS BY DETERMINING THEIR CHEMICAL OR PHYSICAL PROPERTIES 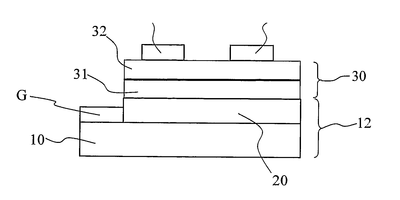