Improvements in interconnection systems between circuit boards for signal switching

Particularly, according to a preferred embodiment, the fiber optic cables, crimped and associated with corresponding connectors, are mounted on the frame according to a preset interconnection scheme, advantageously, an interconnection scheme computed by an algorithm for calculating an optimal topology, the corresponding path between the connector seats on the frame being guided by deflecting formations or similar curvature guide surfaces ensuring a deformation by curvature of the cable always on the same plane within preset limits of curvature radius so as to avoid damaging the fibers or trajectories anyhow critical for the optical transmission of the signals.

Furthermore, the solution that is the subject of the present invention has the advantage of allowing a more efficient manufacturing process, since the assembling of the interconnection circuits to the backplane board occurs by connection ranks (n connectors at the same time) and not for each single connector anymore, in shorter times.

The use of commercial optical fibers, available in the form of ribbon cables according to the desired number of conductors, and the fact that the fibers end with standardized ferrules, compatible with the technology that is the subject of the invention, makes it possible to reduce the assembling costs for the interconnection assemblies according to the present invention, without the need for a specific machining.

However, this document does not completely deal with the technical problem of implementing a complete interconnection system that has reduced overall dimensions and with an easy maintenance in the case of failures in an optical fiber, and it does not teach how to implement a complete interconnection circuit while developing a plurality of fiber optic ribbons on a backplane board to ensure the mutual interconnection of an ordered arrangement of connectors suitable to receive a plurality of switching boards. [0014] The present invention aims to provide a satisfactory solution to the problems set forth above, while avoiding the prior art drawbacks.

The actual surface that the ribbon takes is complex, and composed of spline curves with a variable radius.

Too low values of such length cause unduly heavy ribbon deformations, with too small curvature radiuses, which could cause optical losses and excitation mode phenomena at undesired frequencies. 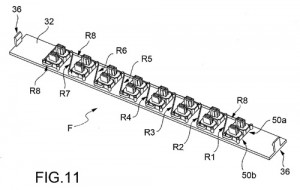